There comes a time in every project that planning must make way for working, you just have to stop thinking so much and cut some tree. 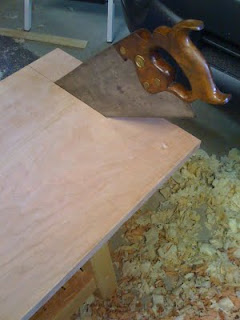 After reviewing, revising, tweaking, reviewing, adjusting, compensating, measuring, critiquing, asking opinions of others who could really give a crap less, sleeping on it, reviewing, revising, tweakin.... you get the idea...I took tool in hand (a beautiful hundred plus year old Disston cross cut, and a brand new Lie-Nielsen rip cut) and started butchering.
Now you have to understand, I just started working wood maybe five years ago (seriously started working wood yesterday, and tomorrow I'll feel the same way) and this piece is daunting, many compound angles, lots of odd tennons, miters, slot dovetails, half blind dovetails, pegged blind mitered slip joints, and the dubious "attach a top to the whole damn thing" joints, and I would really rather get the most of the uncountable (unless of course you look at the account books) dollars of tools in my shop, and do the whole thing by hand. Fairly easy, with the right tools. 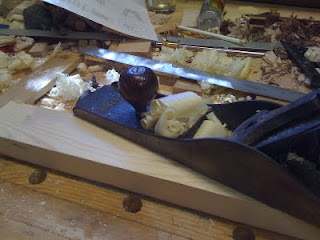 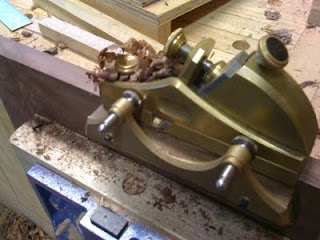 The bevels for joining the leg pieces were cut on the table saw, but as my better half said "you did buy those power tools too, you know" 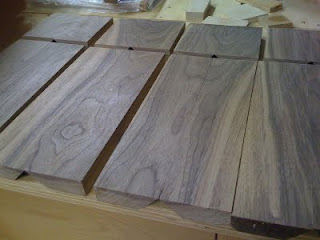 However, there are jobs only a hand tool can do. Lie-Nielsen's Dovetail saw has been perfect for these tiny leg pieces. 80.3 degree compound miters and offset tennons on three by four pieces of walnut on the table saw are not the best insurance of coming out of this with all my digits intact. And to be honest, there's something rewarding in shaping a complex piece by hand, when the tools work exactly as expected, the layout lines are dead-on and the finish face reflects the time spent studying the grain and laying out the cuts accordingly. Even in the beginning I'm satisfied. 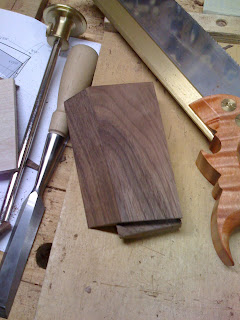 Where exactly an idea begins I cannot say, this particular one began with a slab of wood.
In the desperation for a new piece from the woodshop I reluctantly trudged to my local woodworking store to mosey down the isles for a piece of wood. There it was dirty, splotchy and saw-marked, but oh, so full of potential. Curly cherry can radiate waves of psychedelic euphoria if treated properly, and I could just see this slab unhindered, glinting in the sun in the front room. So several days behind the computer and one vast departure, then mild return to an old idea and I have the inklings of a vision. I like to work out the idea and joinery in the virtual world, long before even attempting it in the real. Sometimes stumbling blocks such as impossible joints alter the design in ways the aesthetic desire cannot. 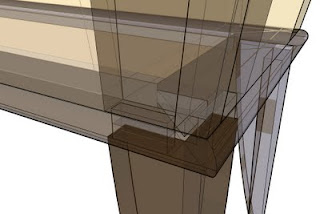 So here's the fourth design and it's working well, curly cherry, maple and walnut. And I'm off to the shop to plane this top! 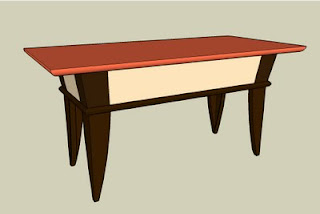